Not only is the Porsche 911 GT3 one of the best Porsches on the market, but it is one of the greatest cars to drive in the world.

Coming from an impeccable legacy of 911s, the new, second-generation GT3 builds on its predecessors glorious past while incorporating all the cutting-edge tech that keeps Porsche forever ahead of the curve.

With a 4.0 engine, 500hp, and the potential to rev this baby all the up to the 9,000 rpm redline, the GT3 is less a car, and more an event. Sitting in the GT3’s leather bucket seats puts you front and centre of a heart-palpitating fuel injection symphony. The chassis system is incredibly balanced. The dual-clutch is the finest on the market. And when you let it rip, the traction is simply phenomenal.

The GT3 is also quite the stunner. It’s streamlined, curved body is instantly recognisable as a 911 but this has an extra edge. It’s imposing. Ready to pounce. Set to leave all other road cars quivering in their factory tyres. Let’s take a closer inspection of the highlights under the hood:

You really can’t go wrong with the Porsche 911 GT3. This is a car that’s all about the visceral driving experience. A pure machine for the purest of thrills. Whether you’re looking to buy a GT3 and want to test-drive before making the big decision, or if you simply want to experience that legendary engine growl first-hand, then get in touch with Supercar Hire who can hook you up with an intimate date with this sexy supercar.

THE ROAD TO THE PORSCHE 911 – A POTTED HISTORY 2018 marks 55 years since the first Porsche 911 was introduced to the world. The German model has become a sports car staple, with its two-door, 2+2 high-performance rear-engined elegance. No true classic car collection can be complete without at least one classic 911.

In the early 1930s, Dr Ferdinand Porsche established his own freelance automotive design company in Germany. Porsche had already designed cars for Daimler and Mercedes-Benz, but now the Dr wanted to design a car that would be cheap enough for working class people to buy.

After WWII, Dr Porsche, who was largely responsible for the development of the VW Beetle, began developing a new line of cars alongside his son Ferry. This was the Porsche 356. Sticking to the basic principles of the Beetle design, the 356 featured a circular body with a flat-four air-cooled engine in the rear. This was the first Porsche to hit the roads and it became quite the popular vehicle with the public. The next car Porsche to designed was named the 901, which essentially upgraded the 356 to include a flat-six engine and a more intuitive steering wheel. The 901 was also engineered to be more accommodating to the modern-day family thanks to incorporating back seats. However, before officially launching the 901, Porsche were faced with a copyright issue over their new vehicle’s name. French car companies held a copyright over any three-digit car name with a zero in the middle. Unphased, Porsche simply switched the 0 to a 1, and thus the 911 was officially born.

The 911 debuted at the Frankfurt Motor Show in 1963. With its sporty aesthetic and super-fast engine (not to forget its practicality), the 911 became a sensation in Germany as well as in the United States. Since those first models, Porsche continued to develop faster and sleeker variants of the 911 that have gone on to capture the hearts of each new petrolhead generation. Porsche reached a rare milestone in 2017 when they built their millionth 911. This specially numbered 911 is kept in a museum at the Porsche HQ in Stuttgart, Germany.

THE BEST PORSCHE 911s EVER MADE Trying to pick the best Porsche 911 ever made is a little like trying to choose the best Beatles song. They’re pretty much all classics. But regardless, everyone will undoubtedly have their own personal favourites.

Quite remarkably, while 911s have continued to develop throughout the half century since their inception, the basic concept has remained pretty much unchanged. This is a true testament to Porsche’s winning formula in developing this iconic sports car.

To celebrate Porsche for creating one of the finest cars known to man, here are five 911s that are among our all-time favourites. Today, the Porsche 911 is almost a byword for a car built for speed. But that wasn’t always the case. It was the 1967 911 S that really set the Porsche apart as a race-inspired vehicle. With its iconic Fuchs forged alloy wheels and a sleek aerodynamic design, this car also looked fabulous – like some sexy speed bullet from the future. Perhaps, most importantly the 911 S was fast. It boasted a 2.0-liter flat-six engine that produced 180-hp and allowed drivers to rev it all the way up to 7200 rpm. Compared to previous Porsche models, this was the one to truly set its sights on style combined with speed. And Porsches have never been the same since. The Carrera has become known as the most basic model of 911 you can buy. However back in 1973, this was the latest cutting-edge sports car on the market as well as the first Porsche to feature a spoiler. Named after the Carrera Panamericana race and featuring a 2.7 engine, this was also the most powerful 911 of the era. Only 500 units were originally produced, which all sold out in less than a week, highlighting the brand of beast Porsche had on its hands. Even thirty years later, the Carrera RS is still widely classed as the zenith of classic 911s.

The turning point of the 911 from fine sports car to supercar can arguably be traced back to the 1975 911 Turbo. This turbocharged engine packed 260 horsepower out of its 3.0-liter flat-six. And with its tendency to oversteer, the original Turbo was quickly dubbed the widowmaker. This beast was a beauty too. The front fenders and rear were drastically flared to accommodate new 15-inch-diameter Fuchs forged aluminium alloy wheels. The Porsche Turbo also featured a streamlined ‘whale-tail’ spoiler which added down-force. Gearhead turbo addition began here. The 993 GT2 has been dubbed the paragon of perfection. This is the Porsche that upgraded from a single turbo to a twin turbo, making this model even faster than its contemporaries, including the V8-engined Ferrari F355. This was also the last of the great air-cooled 911s. Only 57 were ever built and getting your hands one of these masterpieces could set you back a cool $2.4 million! Top Gear described the 2016 Porsche 911 R model “a greatest hits album of the greatest 911s ever made”. And for good reason. The 911 R features a six-speed manual gearbox and borrows key elements of GT3's bodywork as well as the Carrera's rear spoiler. This is a car to get under your skin and leave you dreaming of that uniquely distinctive Porsche driving experience with its powerful torque and that mighty, mighty roar. This is a supercar that sounds like its running on a tank of warring lions.

Edge-of-your-seat performance combined with impeccable style, the GT3 is a supercar that leaves an indelible impression. As such, the Porsche 911 GT3 doubtlessly deserves its place as one of our 23 Greatest Supercars You Must Drive Before You Die.

From the very first 911 released back in 1963 all the way to the GT3 in 2018, Porsche has carved out a truly impressive legacy over the last half a century. If you love supercars, you simply must test-drive a Porsche at least once in your life. And with Supercar Hire, you don’t even need to bust the bank to get behind the wheel of a top-of-the-range Porsche. Contact us today to book your Porsche 911 GT3 driving experience today. 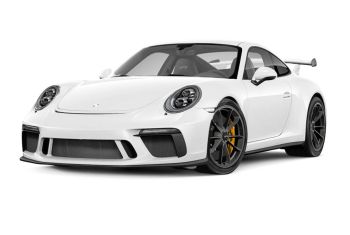