The unique 1993 F1 race at Donington Park will, however, remain forever etched in motorsport history. During the historic race, the legendary McLaren driver Ayrton Senna performed a record lap around the Donington Race Circuit. He advanced from fifth to first position in the opening lap and ultimately won the race by over one minute. This spectacular opening lap is known as ‘the drive of the decade’ and ‘F1’s greatest lap.’

The Donington Historic Festival was launched in 2010 and the annual three-day event is a sought-after showcase of all that is motorsport. Expect hundreds of world-class historic racers, rare and historic racing cars, trade stands, cafés and car club displays. Thousands of visitors have free access to all areas and the opportunity to get up close and personal to the cars and their drivers, who can retreat to the drivers’ VIP lounge in between races. Donington Park also hosts the Classic Motorcycle Festival and, on another note, the massive Download Music Festival.

Don't miss a special edition of Donington Historic Festival on 4-6 May 2018. On the 25th anniversary from the incredible driving performance at Donington by Ayrton Senna, Formula 1 cars driven by or against Senna will be on the track to pay tribute to this formidable F1 driver, who lost his life at the San Marino Grand Prix just one year after this spectacular show. Visitors and fans are invited to share their images and memories of that famous race, which will be displayed at the festival. Make sure you visit Senna’s memorial in the grounds of the racetrack, outside the Donington Collection museums. The Donington Grand Prix Collection opened in 1973 with over 130 racing cars illustrating the history of motorsport from the turn of the 20th Century. Grand Prix cars driven by famous drivers such as Nuvolari, Mansell, Prost, Moss, Senna, Fangio, Clark and Stewart are on display. There is also a special collection of McLaren and Vanwalls racing cars and a collection of drivers’ helmets. In addition, driving simulators provide an adrenalin boost, after which you can relax in the café. The Donington Collection also includes the Wheatcroft Collection with over 130 outstanding World War Two military exhibits including 88 tanks. Tom Wheatcroft, a businessman and car collector, rebuilt the track in the early 1970s. It had been used as a military vehicle depot during WWII and then fell into disrepair. Wheatcroft also moved his own private car collection to what’s now the Donington Grand Prix Collection museum, the largest collection of Grand Prix cars in the world. Donington Ventures Leisure Ltd held the track by lease between 2007 and 2009, however, the global financial crises smashed its plans to return F1 to the track and, instead, returned the track to the Wheatcroft family. Donington Park thereby lost the rights it had won to the British Grand Prix, which then went back to Silverstone. Major upgrades by the Wheatcrofts between 2010 and 2015 bring us the Donington race track we know today. Discover one of the most iconic race tracks in the UK. Supercar Hire organises a variety of track days at Donington Park. Experience the thrill of driving up to nine amazing supercars, the likes of Lamborghini, Ferrari, Aston Martin and many more. Complete with tuition by F1 test drivers and an inspiring mingle with other petrolheads, relish the experience of real speed on a truly iconic race track. 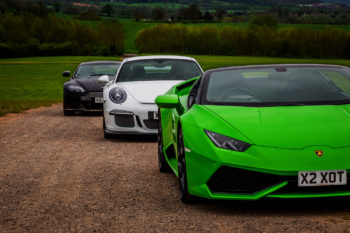